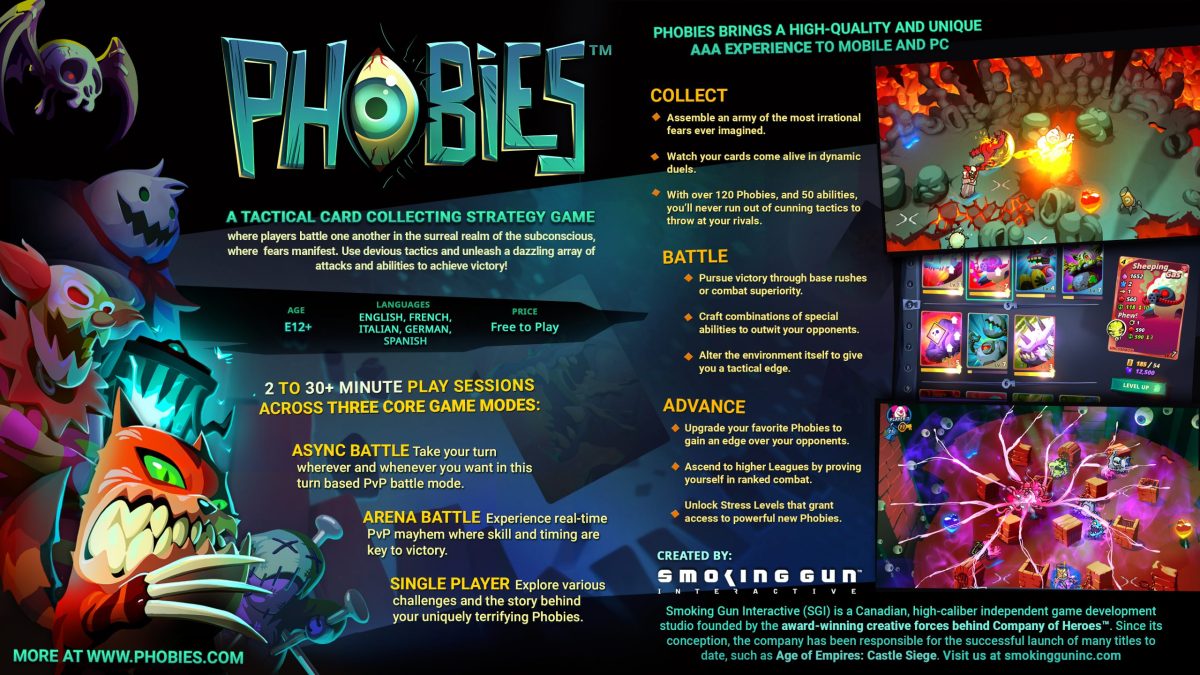 Developer Smoking Gun Interactive is excited to announce it will be unleashing the sum of all fears onto mobile and PC in early 2022 with Phobies, a turn-based strategy game set in the surreal realm of the human subconscious. Founded by the creative talents behind the first title in the legendary Company of Heroes series, Smoking Gun has returned to its strategy roots with the frightfully delightful Phobies. Phobies plunges players into a weird and wonderful world full of their worst nightmares with PC and mobile cross-play support. Collect over 120 monster cards, and build a deck of fearsome “Phobies”, each with its own unique powers, before unleashing them in turn-based tactical battles across various environments.

In Phobies, players command a selection of haunting creatures in deep strategic one-on-one battles. From creepy clowns to rampaging robots, every Phobie offers its own distinct strengths and synergies that must be mastered to gain a tactical edge. Once players build and upgrade a collection of Phobies to suit their strategy, they’ll face off against opponents from around the world across a host of interactive hex-based combat arenas. Each Phobie comes armed with a scarily-strong set of attacks and abilities which can be upgraded and unleashed on the enemy. One example is Sheeping Gas, a dangerously fluffy Phobie who produces a deadly cloud of toxic gas capable of damaging multiple enemies at once. Then there’s Grave Digger, who can send enemies to the grave as well as digging up the battlefield by destroying obstacles in the way to change the terrain of the battlefield.

Phobies turn-based battles occur in various environments and layouts, each posing its own strategic challenge. Taking and holding Panic Points on each map is the key to victory, with each one controlled dealing out damage to the opponent’s heart HP at the start of their turn. Battles can be played out in real-time in the Arena Battle Mode or over more extended periods through the Async Battle Mode. Whichever game mode is chosen,  victory conditions remain the same – destroy all enemy Phobies on the battlefield or reduce the enemy’s HP to zero.

Phobies will be launching later this year on Steam, Android and iOS. Players can wishlist the game on Steam and pre-order it on Android now. Stay up to date with all the latest news and developments by following the official Phobies Twitter, liking the Facebook page joining the games Reddit page, or heading into the official Phobies Discord to chat about the game with other players.

You can also use my referral code for bonus rewards!