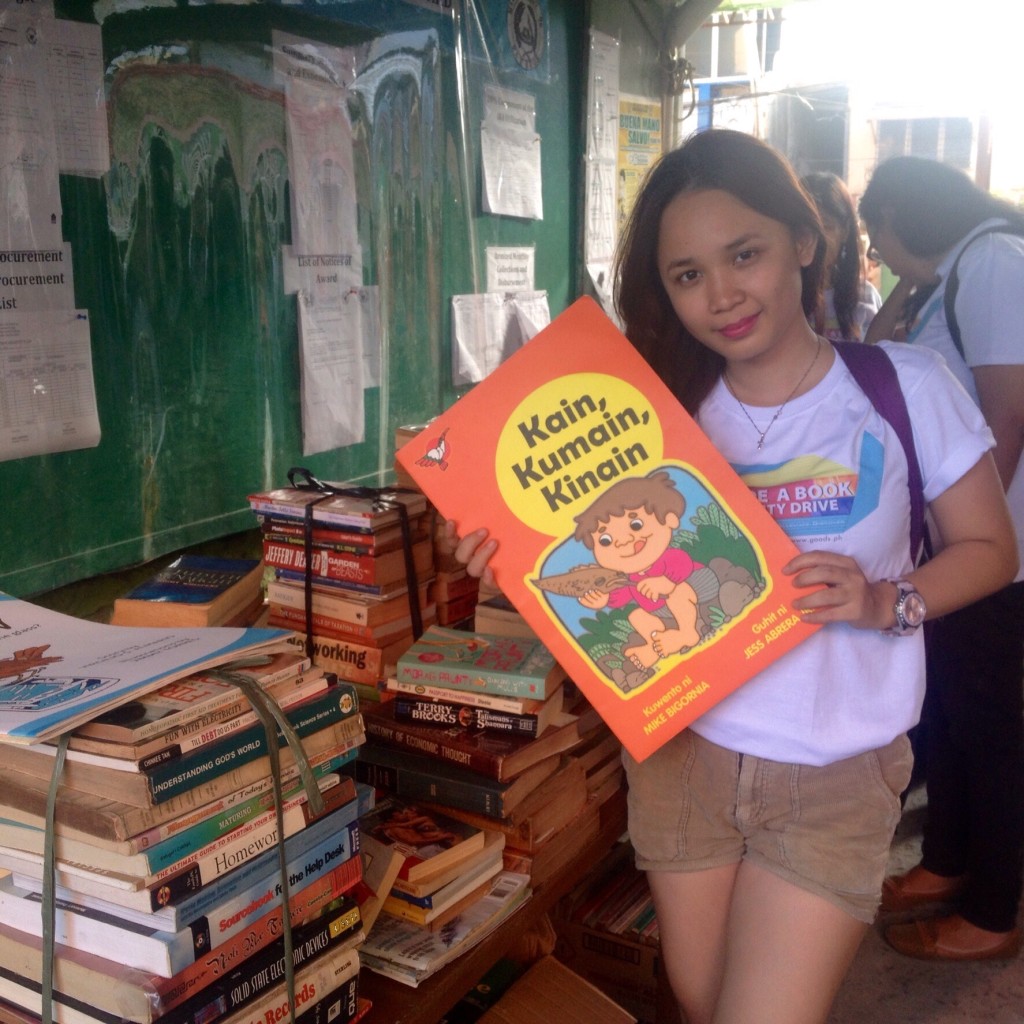 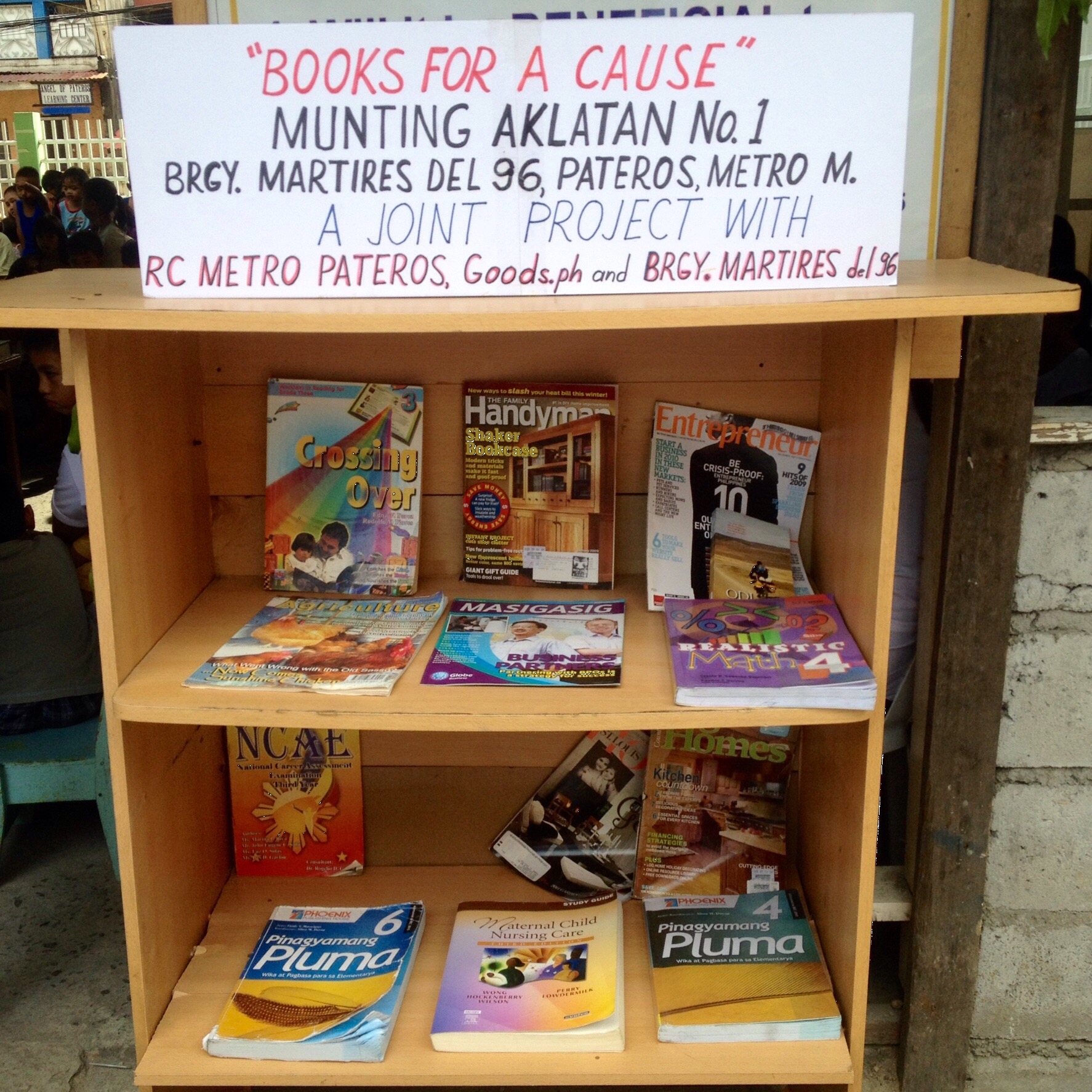 A few weeks ago, I decided to attend a charity event. It was the opening of the first “street library” in the Philippines.

WHAT IS BOOKS FOR A CAUSE?

Books For A Cause (BFAC) is an advocacy that aims to provide precious knowledge to every Filipino and increase literacy through continuous learning. This we do by helping less fortunate kids in the remote and depressed areas around the country to have books.

HOW DID IT CAME ABOUT?

It was in March of 2011 when a teacher from Ramil Sumangil’s alma mater (Baloy Elementary School) requested him to give a short inspirational talk to the graduating class happening on the 1st of April that year.  He accepted the invitation and asked family members what to bring as gifts to his school books which he will be visiting after 33 long years.  They exclaimed “How about the set of encyclopedia and other reference books” which they no longer use due to the abundance of the modern technologies.

So he went on April 1, 2011.  While a lot were trying to fool others on April fool’s day, there he was giving inspiration to the kids and giving out books to a school.    The teachers were glad to have them for the kids, and requested more if there will be any, and to set up a possible school library.  When he went back to Manila, he excitedly informed friends and relatives thru the social media of the need for used books for his alma mater.  His message became viral and so Books For A Cause (BFAC) was born!  Books poured in and continuously do so up to this date.  And, the rest is history. To date, BFAC was able to help more than 150 schools, nationwide.

Books For A Cause supports the Alternative Learning System program of the DepEd that aims to give chances to OSYs to finish and acquire a high school diploma without attending formal schooling.  As one (1) coordinator of ALS mentioned, this is an informal program and does not provide classrooms and books. Sessions are sometimes done and held under the trees, gardens, gymnasiums or in any available venue available. These happened in Cuyapo, Nueva Ecija at least with no reference to other areas.   The books and the library aided them with the alternative tools and venues needed by the volunteer teachers who go to the remote barangays just to reach and teach the less fortunate young people. This, of course is just in addition to the assistance provided by the municipality. For the record, Cuyapo has the highest OSY-ALS enrollees in the whole province of Nueva Ecija.

First of all, this is the founder’s hometown.  It was where he learned his abc’s and 123’s which made him what he has become. He was a living witness to the scarcities which include books in this town. So when he  had the opportunity,  he didn’t  have any second thought  of  giving back to his hometown.

HOW MANY SCHOOLS HAVE YOU REACHED?

To date, BFAC has helped more than 150 schools nationwide.

Sad to say, we are all aware that libraries enjoy a diminishing popularity among kids these days what with the presence of modern technology.  Those who can afford can now access their favorite books online.  Kids hardly see the value of real books because everything now is at the tip of their tiny fingers.

On the other hand, people are also not able to go to libraries because they are too busy attending to their livelihood.  With this scenario comes the MuntingAklatan of Books For A Cause.  BFAC is installing its first ever street library in Barangay Martires del 96 in Pateros.  To be called Munting Aklatan No. 1, the library will be positioned in a tricycle terminal and will be open to public, especially to the tricycle drivers who can read the books while waiting for their passengers to come, instead of watching TV, or just chatting with co-drivers about no-non-sense topics.

It will be patterned after the Little Library that’s already set up in some parts of the United States of America, anyone who likes the idea can also put up another Munting Aklatan in their area in coordination with the BFAC founder, to be called Munting Aklatan No. 3, 4, 10, 100, and so on.  We will duplicate Books For A Cause in different areas and let everyone be involved in our literacy advocacy.

CAN OTHERS DO IT IF EVER?

Everybody can do it.   Passion to help should always be present.  Nothing more. Nothing less!  Some are motivated to do one good action because they expect something in return.  They usually end up being criticized or even worse.    Books For A Cause is geared to help increase literacy and promoting the love of reading among kids particularly in the remote and highly depressed areas of the country.

Books just arrive from everywhere.  Here, we can see that there are a lot of Filipinos, even foreigners who have the desire to help… they just need someone to connect to and start.  The social media plays a major part on this.

BFAC only gives books to schools in need.  BFAC requires a simple request (that the school need books)  from a representative of the school, or even someone  whose heart is close to the school (could be a graduate of that school, or someone who sees the need of the target school) and we start coordinating from there including the logistics.

If you have used textbooks or any reference books and learning materials lying around in the closet, please do LOTS OF PEOPLE a favor. DONATE. SHARE. You just don’t know how important these would be to the children, out-of-school-youths and schools in the remote and depressed areas in the country.

GET INVOLVED!  Be a part of their lives! Let us help in realizing other people’s BUNCH OF DREAMS.

Everyone can be a donor. You can drop, visit or send the book/s and learning materials thru mail, LBC, DHL, etc. to:

BOOKS FOR A CAUSE – Quezon City 3

BOOKS FOR A CAUSE – Bacolod City

CASH DONATIONS may be sent thru:

Ramil Esperanza Sumangil grew up in a family where education matters — a lot!   He studied in a  school in a remote barangay  (Baloy) in Cuyapo, Nueva Ecija where books were scarce despite their importance to every pupils and teachers.  But, because he needed to learn, diskarte na lang nila at ng mga teachers nila ang matuto learn given the limited copies of books. The same was the case during high school and college days where libraries became his best friends (dahil walang pambili ng sariling books), especially in college.

When he received his first salary from his first job, the first things that he bought were a book (he does not remember the title anymore) and a flat iron (at the end of the day where he would lay his shirt and pants on his plywood-made bed at night before he sleeps, cover them with a sheet,  and sleep on them, and ready to wear the following day for his office.

Books became an obsession that he would frequent his favorite book stores every payday, buying at least 1 or 2 books and literally building himself a small personal library over the years.   With the thinking that no one from his own kids will experience what he experienced during his school years, he and his  wife (Lynn) bought a  set of encyclopedia and other reference books even before  Mitzi (their eldest daughter) was  born.  The books played a major role and gave  a strong foundation of learning to their 3 kids: Mitzi, Raham and Ravi as they grew up.

In 2014, Ramil chose to give up his day-time job to attend to a lot of requests from different public schools in the country.  He  used to do the Books For A Cause (BFAC) activity during weekends only, which lessened the quality  time with his  family (that  gave him his  2nd reason) and lastly,  to attend to a long-overdue business plan to help sustain the needs of his  family and support BFAC’s activities.

Ramil and his wife – Lynn believe that everything about BFAC  is His will because every time they  plan or even think of  stopping  BFAC,  books come in like crazy!

Rewards?  The mere sight of the happy faces of the many children being benefited by this advocacy  is already a great reward for him.  No money or any form of material thing can surpass the feeling of happiness and satisfaction every time he sees these kids.

“I would say, more of spiritual gain..Kasiwalang  monetary reward dito.   It’s really more on the love in giving … than receiving.  The mere sight of these kids na masaya, fulfilled na ako.”

Ramil owes everything from GOD, family and the undying support of his  friends, donors and volunteers who made this advocacy a success.

Books for a Cause