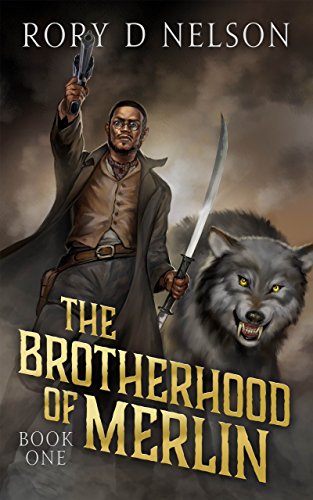 The Brotherhood of Merlin Book 1 was published last May 14, 2016. I bought the digital version about a week ago in Amazon. The book is quite interesting and not my usual genre but I thought it deserved to be reviewed. The genre is Sci-Fi/Fantasy with 398 standard pages.

Five hundred years after the death of King Arthur, a sadistic tyrant of Visi-Galia, attacks unprotected and vulnerable townships in Gilleon, igniting a deadly chain of events. Because he was unfairly denied a proper chance to compete for valuable mine rights and outbid by a Councilman from Gilleon, he reasons that he can invade Gilleon’s vulnerable townships and force the Council to negotiate with him.
Merlin, the lead knight in Lycenea, has foreseen just such a predicament. With the gifts of premonition, telepathy and intelligence, he and 9 of his most formidable knights go into battle against Jason and his force of nine thousand.
At stake is everything. The fate of the prisoners who are awaiting to be sold into slavery rests in the hands of the deadly knights. Specifically, two girls who were attacked in Missalia and are now orphaned, are at the mercy of the sadistic King. Will Merlin and his band of knights be able to rescue them in time?
Adele, the older sister, has plans of her own for escape. Will she prove successful or will her plans be foiled? If she is caught, what will become of her and her sister, Sylvia?
Dante, a boy from Coifen, is also now orphaned. He is the sole survivor of a brutal attack on his family. An unlikely heroine has come to his rescue- a mysterious white wolf. Unfortunately, the attack has left him blind. He and his guardian make their refuge in a remote cave. He clings desperately to the hope that God has spared him for a reason. Every night he goes to bed, he says a prayer to his talisman, the Merlin, a game piece that his father gave him before he was forced to abandon him. It was the last gift he received before all hell broke loose. Will he be rescued? Will he find a permanent haven? His fate also lies in the hands of the Merlin.
Merlin and his troupe lead the Visi-Gauls in a high stakes game of cat and mouse. Jason, though capricious, is not stupid. He uses every means at his disposal to eliminate Merlin. Who will prove the victor? Fighting a severe war of attrition, it seems at times that Jason will inevitably win; but don’t count the Merlin out. He is beyond slippery. Every time it seems that Jason has the gifted knight, he is thwarted yet again.
The jaw-dropping confrontation will leave you breathless!

The book is a mix of medieval and modern fantasy. It’s a fast faced bloody battle packed story. The first few chapters is already full of action so it’s not dragging than most action books that I’ve read. The hero is not perfect, but he has a good heart. The book is well-written by the author in a sense that when you read it, it feels like you are actually there watching everything that’s happening. The author chose just the right words and description. The final chapter is shocking, it’s not the usual ending you might probably have read. The characters were also great as you will feel that they are full fleshed. Each character brought their own special touch in the story. Even though this is just book 1, you would think that this will probably a cliff-hanger, well, it’s not. I am very satisfied with the last few chapters. Definitely a must read.

The Lifestyle Avenue’s rating to The Brotherhood of Merlin Book 1: 4 out of 5 stars.

Have you read The Brotherhood of Merlin? What are your thoughts? Share them in the comments!